Welcome here! » About us » History

From iron age and hunting lodge to modern hotel

Låsta Manor has ancestry way back in time. Join us on a historic journey, through almost 2,000 years. See how Locked Farm Hotel came to be – from barn and pigsty to modern hotel!

In 300–400 after Christ, the first people came to the grounds that today surrounds Låsta Manor. It's during the migration period. Today there are several antiquities from their graves and settlements.

In the first half of the 17th century, the main building is built on Låsta, the one that remains to this day. Låsta farm then gets manor status in 1662, with over 800 hectares of land.

In the 17th century, Låsta is also called Queen Kristina's Hunting Lodge. Queen Kristina (1626–1689) spent much time in and around Strängnäs when she was hunting. She reportedly lived at Låsta Manor at the time!

Locked Manor supplies a small society right up to the end of the 19th century. During the 20th century, agriculture is reduced and the farm becomes a facility for storage.

The Wetterberg family buys Låsta Manor in 2005. This consists of 12 hectares of land, which is partly used for winter storage of recreational boats. The main building has changed over the years, but many original features remain, such as beautifully worn pine floors and ceiling paintings.

Running some kind of guest house/room & breakfast has long been a dream for us in the Wetterberg family. In 2007, we decide to do it. Drawing and planning take off and we apply for various permits.

In May 2008, the transformation of a 400 square metre building starts – from barn and pigsty to a guest building with rooms, bathrooms and common areas. Now follows an intense time with building and renovation. Read more here >

In 2013, we are also opening the second floor of the building. Six rooms are added, with another 16 beds. Now we are also building a large conference room with associated kitchen. A new panoramic window gives an overview of the field and meadow.

The renovation started on May 1, 2008, with Xentrix AB as contractor. We started outside with gutters and downpipes. Then the old concrete floor was removed, to make way for insulation and a concrete floor with underfloor heating.

In total there were 12 pillars/poles holding up the roof. Of these, some had to be moved out, while the others went to "hide" in the walls. Only one was allowed to remain and was dressed in with plaster.

Exterior walls and ceilings were isolated and some parts were replaced. Interior walls were erected and doors were put in.

Then the fun part – the visible! Door frames, wall panelling, doors, handles, kitchen furnishings and toilets came into place. Many decisions and many choices … In mid-October we were able to start decorating with furniture, to receive the first guests on October 18: five families from Stockholm.

November 6, was the official inauguration. The transformation from barn to hotel was a fact!

Much above our expectations, so nice and nifty. The room was very clean and comfortable. The staff were very friendly and helpful.

Well-insulated didn't hear others. Large and clean spaces, well planned, everything was available.

"Stylish accommodation" It had that little extra. – Incredibly beautiful building!

Fantastic place with beautiful rooms. Tasty breakfast and the staff were very friendly and helpful.

"Very nice hotel." The house owner is quite welcoming, and the place is beautiful and quite. I like to watch the stars in the eveing, and our kids likes the horses near the hotel. Room is very big and clean, very suitable for family travellers. I will definitely choose this hotel for my next trip to sweden.

This place is exceptional. A successful blend of a hotel and a B&amp;B. The restored farm building has extra high inner space. The smell of the wood, the clean dining room, the well-equipped kitchen and the nicely furnished rooms all give Locked special charm and atmoshphere which makes you want to spend more nights there than you originally planned.

"Wonderful place to relax." Lovely place. Would happily come back. For longer. 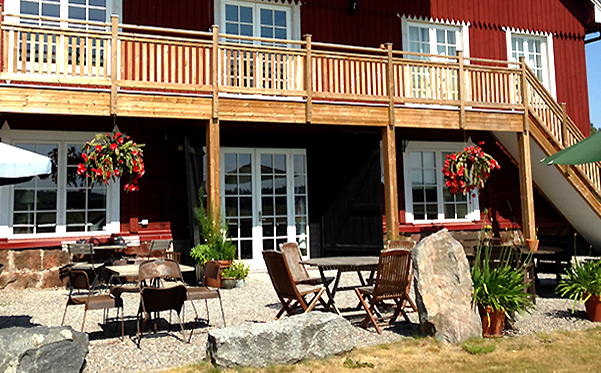 Book your conference at Låsta Farm Hotel. Here you have the best conditions for teambuilding and meetings.